Last Week, I covered the general lessons learned from GenCon. This week, I go over in depth how the playtests went.  (I really wish I had the feedback comment cards to work off of, but unfortunately, they’re in a compariot’s trunk, so I’ll have to go off of what I remember.)

All, in all, we ran the following different game sessions (with some repeats)

Skeleton Crew: Panic at the Pizzeria – The first game we ran was scheduled for 5pm on Thursday… which was about five minutes AFTER we arrived at the Convention Center. One panting scramble through the streets later, I was able to make it to my game with only a minimum amount of sweat. Have you ever heard of the expression “a two-bagger?” Well, that night I was a two-bagger GM, as I carefully planned every single detail of the adventure, and then left the character sheets in the car with my friends as they found a parking spot; thus, I was so prepared for the game, I had a second folder of character sheets just in case, which served as proxies until my friends could rejoin me. The players were a perfect cross-section of experience players: one had played a little Fate, one had only witnessed it, and the third had never heard of it. I spent the first 25 minutes explaining the character sheets and the basics of the game (also start with Aspects), and launched into the game.  The adventure, without spoiling too much, was the first adventure I ever wrote for Skeleton Crew (and any RPG, really.) Of any adventure I’ve run, it definitely has the most intricate plot, making it run about 3-4 hours. However, I can’t help but feel like I added too much into it- players often seem to get sidetracked by side-details (like hostages in the restaurant), all the while overlooking lots of mystery/background material I through at them. I’m not sure if the over-planning is good, or whether it the affair needs to be streamlined.
Rules Tested:
Q. Does the setting fit the Fate mechanics? – A. I believe so. The lighter / crazier the characters, the easier the players found it to create new aspects and add exciting elements to the scene.
Q. How do the new mechanics rate?
A- We tested an amended Skill table- with this test, none of the players seemed to have any trouble, nor found that our original skills seemed to stand out.
A – We tested the Round 0 – (No Attacks in the first round) – Players seemed to understand it quite well, and used it as a way to play around with building new aspects. As yet, no player really explored with investigating EXISTING aspects hidden on a character, but perhaps I need to teach by example more.
A- Also explored establishing Character Relationship aspects between the players (more on that later.)

Costume Clash –
When we signed up for First Exposure Playtes Hall, they asked us very specifically how many people we wanted, and what age range- we asked for younger kids, a request they don’t get very often. They didn’t disappoint though, as we definitely got 2 test groups with kids (I’d judge age 6-10) along with their parents. Years before we designed Costume Clash, I started a game based on Convention goers- we’ve since put that one of the shelf, but the next game we made was called “Cosplay Clash,” and was themed at con goers. We’ve since renamed it “costume” for broader appeal, but the costumes still remain very nerdy themes (fantasy, sci-fi, & anime.) It was nice to see that a younger group that may not go to many conventions still enjoyed the themes and piecing together the costumes.
Observation: We made sure to include costume items for male & female characters, so that players could cosplay and crossplay all they want. However, one test had two little boys, who refused to keep any Magical Girl or Fairy parts. It didn’t seem to hurt their fun any, but it’s definitely a reaction I had not anticipated.
Rules Tested: The set includes 2 types of cards: base cards, and special cards. The special cards include Jokers (wild color/suit), Old Maids (no points), and Boxes (any body part). With the younger kids, we added them in the third round, after they had 2 rounds to practice. With the older groups, we added them on Round two.
Second Test: After the initial test, we still had an hour- with the help of the awesome First Exposure staff, we were able to whip up a second round of testers. They included adults and teens, so we got a chance to see how older groups reacted. Some of the young adults saw it as parents, saying that “it’s the perfect game to play before bed.”  The teens either enjoyed it for what it was, or offered helpful advice.
Constructive Comments: Older audiences felt the advanced cards added much to the game (meaning we might have to include them in the base kickstarter set). They also seemed to bemoan the lack of any graveyard retrieval; once a card was discarded, there was no way to get it back. I was aware of this when I devised the rules (to capture that stifled curse as the card you need disappears into the pile), but I can see how adding graveyard retrieval would add a higher element of strategy to the game.  I had thought of adding a special set of costume cards (zombies?) that let you search through the discard, but perhaps it would be worth working in into the mechanics; some suggestions included letting players grab the first few top cards of the graveyard, having a “flop” like Texas Hold Em, or letting players draw 2 cards and discard 2 (although, that would make rounds go even faster.)

The time is now! Our team of talented gamers is leaving tomorrow for GenCon- we’ve got a car full of business cards, prototypes and hope.

We’ve got a pretty full schedule as is, but we’re hoping to squeeze in a few extra games here and there (possibly at Games on Demand, if they’ll squeeze us in.) If you’re interested in scheduling an extra game, or just want to say hello, this is our current schedule:

So, find us if you want a sneak peak at the games, or just take a swig of our famous GM Juice!**

~~~~~~~~~~~~~~~~~
* Masters of Umdaar – MoU started as a Tangent Artists game, but has since been optioned by Evil Hat. Which we think is fantastic, but you likely won’t see too many spoilers of it here.

** GM Juice – My special blend: 1/2 green tea, 1/2 lemon zinger- with a dash of spearmint tea, lemon juice, and honey. Perfect for the thirsty GM, and guarented to

What is Dungeon Tours Ltd. ? 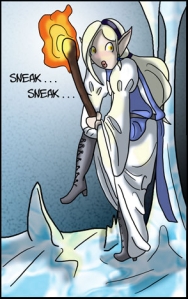 Tours Ltd. is a work-in-progress roleplaying game. It uses the Fate Accelerated game system, but only barely- it’s more about the story telling, with a few dice thrown in to add some craziness.

Origin: The basis for  Dungeon Tours Ltd. comes from fantasy board games and video games that let players take on the role of the bad guys- instead of having one GM, there are multiple players controlling the monsters, traps, and curses that befall the hapless heroes. We started wondering: could you do an rpg with the same villainous premise? The problem became instantly clear- it’s way too easy to make the dungeon impossible to survive. The solution was to make it a Goldilocks situation- the dungeon would have to be hard, but not too hard.

The Premise: Players take on the role of retired Adventurers, who are hired to guide bored nobles through grim dungeons. However, real dungeons are scarce and fraught with danger- so why not lead the dumb noble through a fake dungeon of your design? Your job: find a dank cave, fill it with bogus threats, and convince the noble that it’s the real deal. Can you finish the build on time? Can you fool the noble long enough to get paid?

Play: We’ve run a few test games, and so far, it’s been a huge success. It plays like a mix of Dungeons & Dragons, Leverage, and Trading Places.  Sessions last an average of 2-4 hours. Players that are new to Fate Accelerated, or Roleplaying in general, seem to have no problem jumping in.