The kickstarter for the Dungeon Tours Limited is soon approaching. In the meantime, we’ll explore some of the origins behind the game.

But first, what is Dungeon Tours Limited? 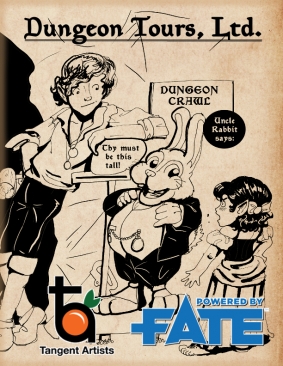 Dungeon Tours Limited is an upcoming tabletop RPG from Tangent Artists. In it, players take on the roles of semi-retired adventurers in a fantasy world. Your days of delving into dungeons are almost over. However, there’s been a recent trend of young nobles going “dungeoning”; and you have a client lined up who is willing to pay crazy money to join your party on your next adventure.

But there’s a problem: the noble twit won’t last three seconds in a real dungeon. So, you’re going to have to fake it. You have three days to find a cave, fill it with foam spikes and papier-mache dragons, and guide the client through. Can you reach the end without the twit uncovering the truth?

Like many RPGs settings, we owe some inspiration to Dungeons & Dragons. One night, our group was going over some of the ridiculous pre-made adventures of 1st edition. You probably know the type: adventures with ancient tombs, teeming with living, breathing monsters, buried miles below the earth . Immediately, we some logistical flaws:

This got me thinking; wouldn’t it be fun to flip the script? Instead of having the GM create the dungeon for the players, what if the players were the dungeon makers? This lead to:

In this version, the players play monstrous humanoids (orcs, goblins, drow, etc.) working hard on a real dungeon. They’re been hired by a warlord to keep the lair safe from adventurers.

This was purely a thought experiment, with no actual rules were created. I was even unsure whether this would be better was an RPG or a boardgame.

However, I quickly stumbled upon a two-prong problem:

The solution: to develop a game that had to walk a tight-rope. Rather than trying an extreme goal that can be reached through extreme means (ex. kill all invaders), it had to be a balancing act. It must be have a certain amount of X, but not TOO much X.

This is where the idea of a fake tour first took place. It’s had certain mechanics that I’ve tried and set aside (ex. the idea of a Scare-o-meter that must be hit just right –  not to much, not too little). However, the fundamental idea of creating fake threats has been in there since the beginning.

Fun Fact: It was the “build a project” backbone of DTL that would later provide the framework for Evil Hat’s Uranium Chef. It’s funny that they’re released in opposite order.

That’s all we have time for this week. Expect more previews as we get closer to the DTL launch date.

What are the best / worst features to show up in your dungeons?