What is Skeleton Crew RPG?: Skeleton Crew RPG is a role playing game setting that takes the most terrifying creatures from the corners of your nightmares, and turns them into- a light-hearted adventure. In SCRPg, players can play as zombies, vampires, mummies, and other classic monsters- draw inspiration from your favorite myths, comics and B-movies. Of course, these supernatural hunter teams don’t have to be exclusively undead- your team might have a human or two, whose training will not be invaluable- perhaps you’ll be teamed up with a slayer, a researcher, a priest, even a spellcaster?

What is the setting?: The game takes place in the city of New Manchester, a creepy East Coast metropolis overflowing with ancient curses, sunken fishmen ruins, and laboratories full of mad scientists. Luckily, you’re not alone in your quest- there are allied groups, like the scholars of Hubris U, the magical order of P.O.O.F., or the pious Convocation.

What rules will it use?: SCRPG uses the Fate Core as its basis. You’ll need the Fate Core rulebook to play.  It’s available at the Evil Hat  website.

What’s in the rulebook?: The rulebook provides our own twist of the Fate Core skill list and group rules; a guidebook for dynamic Mortal States and Professions; a Bestiary for traditional and hilariously oddball monsters; preset Faces and Places of New Manchester, as well as how to make it your own; the simple three-step Magic system; take your pick of two easy systems for Gear; and a preset, ready to play adventure with characters.

When can I play?: Beta testing is expected to open on October 1st– Connect us if you’re interested! Expect the full game to be released within the next two years.

Where can I find out more about the Skeleton Crew?: For updates on the game, stay tuned to this blog.

Wait, there’s a comic too?: The rpg is based on the comic Skeleton Crew- there are currently eight full issues, with another page added every Monday. Read it for free at www.tangentartists.com

Today, let me introduce you to one of Tangent Artists Tabletop’s works in progress: COSTUME CLASH!

Costume Clash is a family-friendly card game inspired by our favorite costume parties and masquerades. The Premise: each player is trying to win top prize at the costume contest, but couldn’t be bothered planning an outfit in advanced. Make the best outfit you can out of leftover parts, and make it fast!

Attempt 1 – A few years ago, I tried to make a “build your own monster” game, with the not-all-that-terrible name of “Genomonster.” Each card represented a body part, like a Wasp head or a Yeti arm. Players grabbed cards from the “Gene Pool” (terrible, I know), and built a monster that could have any number of arms and legs. After the monster was built, the players where actually supposed to fight each other with the monsters- I never got a chance to test the combat rules, but a quick glance at them today, I’d have to say they’re pretty terrible.

Attempt 2 – Once I joined Tangent Artists,  I had a chance to experience anime conventions first hand. This prompted a con themed game called Wrath of Con- it was another failed attempt, with the final rules resembling Munchkin with a grid.

Attempt 3 – I don’t know when it was, but the body-parts idea eventually merged with the convention atmosphere, into becoming a game of mismatched costume parts. (I’ve also done this first hand myself- I’ll share that in a future post.)  The first title was Cosplay Clash, but  we realized that the costumes could be nerdy without having to use a name that ONLY nerds would recognize. I made a prototype on index cards, which is included in this thread (I’d glad I’m not the final artist on the project.) 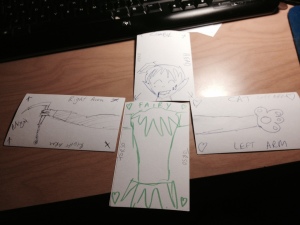 Close-up of the Prototype (Recognize the Zombie head?)

For our first RPGee-Whiz entry, we thought we’d showcase on of the monsters that shows up in the Skeleton Crew RPG: The Oboro-guruma, aka the Gloom Cart.  This is a fun monster for any supernatural Fate Core game, as it merges two things together: Driving and Combat. Know, any epic chase scene doesn’t have to include stats for the cars AND for the mooks driving it- they’re one in the same.  Though the skills are slightly different, feel free to try it in your Dresden Files game.

It’s official: the comic group Tangent Artists now has it’s very own game blog! What can you expect here? PREVIEWS

Stay tuned to this spot- more content each week.  Or, read the webcomics at www.tangentartists.com.