This week’s entry is going to be on the short side, as it was written while Tangent Artists 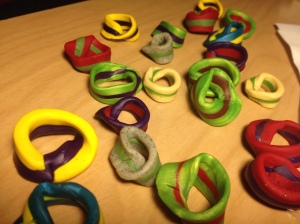 The 1-sided die! Get them now, before they tear a hole in the fabric of the universe.

were while at Marscon. This is our 4th year at the Williamsburg-based sci-fi / fantasy con, and we’re delighted to once again showcase our comics, books, and gamer stuff. Also, we’ll be offering up one of our signature impulse items: the One-Sided Die!

In our webcomic CRIT!, we poked fun at wizards, gaming, and a little bit of breaking the fourth wall. Afterwards, we started wondering: could you actually make a one-sided die? A little bit of Sculpy modeling clay, twist it into a mobius strip, and voila! You have an affront to time and space!

The first con we debuted them, we got a lot of people who chuckled, more who didn’t get it… but when a a math teacher bought six, we knew we had a winner. While we’ve sold a number of them over the years or given them as freebies on top of larger purchases, their greatest strength comes with their ability to draw people over. Crying “1-sided dice!” aloud is enough to get several con-goers to about-face and come closer to see what the heck you are talking about. As we say, “a critical success AND a critical failure with every roll!”

Since then, I’ve made a few other hand-made dice. They are not perfectly balanced, and thus I stay away from the most commonly used dice, sticking to odd things that players would seldom or never use. Here are a few close ups: 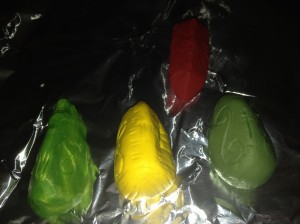 I actually have a rough mold for the three-sided barrel dice, which I’ve found work best with a “menhir” motif. The design gives tons of space on the sides for non-functional runes and swirls, but painfully little room for the “number.”

For the four-sided barrel dice, I like using either the

I fart in your general direction…

The towers are fun, in that they use the number of windows as the number on the dice face. 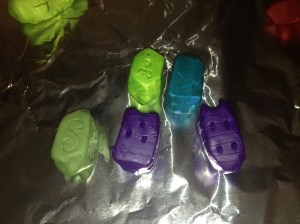 Greyskull shall be MINE! Bwaaahahaha

Most of my towers use expensive stone clay, so I thought I’d appeal to the seven-year-old in me and make a few towers in Skeletor-Purple.

They’re more impressive when they’re not wet and gooey… like babies.

To finish and to help accentuate the texture, I always give them a quick wash. Black works for most of the dice, but the yellow and off-white dice need brown.

This time I experimented with sparkly black. I like the finished look, but it changes the texture. The sparkle paint I used has a more plasticy “feel.” This might be a drawback, or mean that it has a thicker coating protecting it. We’ll see.

For your dungeon raiding pleasure!

Here’s a final shot of the sales box, including some older dice. Feast your eyes!

Tangent Artists in their natural habitat.