I love Lovecraft. I have yet to read all of his works, but I have read enough to understand why his stories are a steady source for many an adventure game; what he lacked in plot, he more than made up for in world-building and ambience. His fictional world is a perfect sandbox for other authors and roleplayers to romp, play, and run screaming through.

However, even Lovecraft borrowed from those that came before him. My goal, for the next year or so, is to study some of Lovecraft’s influences. One of the first authors I’ve encountered at was Lord Dunsany (note: his full name, in all of its splendor, is Edward John Moreton Drax Plunkett, 18th Baron of Dunsany… yeah, you can’t make this stuff off). Dunsany is amazing, but his influence on Lovecraft is more subtle; if anything, his work more closely resembles the work of Neil Gaiman. (I might do an entry inspired by him at some point, but not today.)

I stumbled on the next influential author when I started researching fictional languages: in Lovecraft’s “Dunwich Horror,” the villainous Wilbur Whately learned “the Aklo” for certain rituals. He used these rituals to seek knowledge and predictions, seeking questions from beings “from the hill” and “they from the air.” A little digging revealed that “Aklo” was invented by one of Lovecraft’s favorite authors, Arthur Machen. Chronologically, Machen is a late Gothic writer, although some have called him one of the fathers of modern horror. His story, “The Great God Pan,” has been described by Stephen King as “Maybe the best [horror story] in the English language.” Machen invented the rituals and gestures of Aklo in the 1899 story, “The White People.” The story takes the form of a journal, written by a young girl, as she travels to hidden worlds. I found reading the stream-of-consciousness narrative is a little frustrating (it reminded me of the horror I felt reading “The Portrait of the Artist as a Young Man” is high school), but the concepts are beautiful. In honor of Machen, I’ve adapted his White People into this blog’s monster of the week.

THEY FROM THE AIR / THE WHITE PEOPLE / NYMPHS

Lecturers at Miskatonic University are often plagued by questions about beings of olden times, of sunken cities and old gods of the ice and sea. Some of their colleagues in England and Wales, however, have been tracking an equally old but divergent thread of inquiry. These archeologists, looking into the ritual sites of gods of the Prehistoric Britons, discovered markings unlike any subsequent language in the area. They bear a cursory resemblance to Aklo, but as this language is mostly documented in the Fertile Crescent, making any crossover undoubtedly a coincidence. Accounts from Roman scholars stationed in the British Isles speak of altars erected to gods of the sky and roaming nighttime ceremonies. The Glendower area is also rich with local folklore, with countless stories about travelers being lead astray by fairies, will-o’-the-wisps, or the devil himself. Dr. Ravensbourgh, a renowned biochemist, believes that the local phosphorescent fungi may be the inspiration for both folk tales of the last few centuries and the gods of ancient times.

However, for the sake of completeness, it would be amiss to not include one final theory: Dr. Llewellyn, a longtime colleague of mine, had recently gone missing during one of his archeological digs. He was found several days later in a terrible state of mind; he claimed that a tunnel in one of the burials mounds lead to a valley henceforth not notated on any modern map. He described creeping vines that have yet to be classified, standing stones that seemed to sing wicked songs, and many more impossible sights. He claimed that at the end of the valley was the Woods, which he said, “must not be described.” Hidden within was a pool filled with fire, attended by nymphs that whispered secrets… the closer he came, the more he understood. He said that they glowed with an otherworldly beauty… a grace so perfect that it overbore his mind and nearly burst his heart. The doctor’s condition has stabilized, but I don’t believe he shall ever be the same. If it can be believed that there are old gods that are so hideous that they can drive men mad, it must therefore be surmised that the opposite is also true: that there could be beings out there of such splendor that the human mind cannot encounter it and remain unscarred.

Untouchable: If a Nymph uses Athletics to overcome a physical obstacle and ties, treat it as a success; if you roll a natural success, the nymph may move an additional zone or take an additional action this exchange (may only gain one free action each exchange).

Like the Wind: During their exchange, before taking any action, a Nymph may place the aspect “Phased Out” on itself; this is a free action. While that aspect is on it, the nymph is invisible and intangible; similarly, it cannot Attack, nor can it suffer any kind of stress, but may use or be targeted by other actions as normal. The nymph may discard the aspect at any time, and other characters can overcome the aspect with Notice.

The White Lady is a prominent figure in local folklore; all of her stories end in eternal bliss or in tragic deaths, with nothing in between. Her tales often pair her with a mysterious Man in Black; depending on the story, he is either her servant, her lover, her nemesis, or all three.

Aspects: Radiant White; Hypnotizing Beauty; The Man in Black Will Be Here Soon

Lock On: If the White Lady uses Evoke to attack a target and succeeds or ties, place a “Drawn In” aspect on the target. The next time the White Lady attacks that same target with that aspect, the White Lady gains +2 on the attack. This is cumulative, so the attack gains +2 for every previous attack (i.e. +2 on the second attack, +4 on the third, etc.) A character may overcome a Drawn In aspect on themselves with Will, or may overcome a Drawn In aspect on an ally with Provoke; likewise, if the Drawn In character succeeds with style on a Defense roll against the White Lady, they may remove the Drawn In Aspect instead of taking a boost

AND NOW, A WORD FROM OUR SPONSOR:

Remember, this month we are launching the kickstarter for Fate Accompli, our original erasable notecards for Fate gamers. 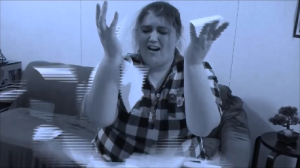 The normal cards, they are le fail. 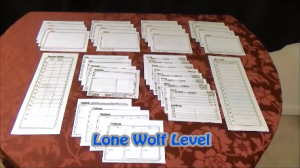 Bask in their glory. BASK!