Today launches a new segment on the site: the Toybox Review! But first, some context: I remember reading that Gary Gygax and the early D&D team used oddball, cheap-o plastic figures as inspiration for such creatures as the Rust Monster, the boullette, and even the signature Owlbear. If you’ve never heard the story, artist DiTerlizzi retells it quite beautifully on his blog.

Likewise, I learned during some of my Masters of Umdaar playtests that players respond surprisingly well to playing with brightly colored plastic toys. You’d think the poorly cast, un-detailed faces would turn people away, but I suspect it made new characters easier to step into- I chalk it up the psychological phenomenon called “Cognitive Closure.” Even if a shape is poorly defined, the human brain is capable of filling in any missing details. Observe the triangle on the below, borrowed from this website.

Riddle me this, Batman- when is a triangle NOT a triangle?

When a player spends a long campaign fine-tuning a character, they end up with a very well defined picture in their head of what the character looks and feels like. Likewise, for experienced, long term characters, detailed figurines, (the kind Reaper and Games Workshop make from metal or resin), are perfect- the level of detail reinforcements the player’s image. However, if the character is brand new, giving them a well-defined miniature, I theorize, does the opposite. The miniature reminds them, “this is a well-defined character that you didn’t design.” There are no details for the player to contribute, because that’s all been done. Alternatively, if it’s low-detailed plastic toy, the player will consciously and subconsciously fill in the details with their own imagination, making the toy into something that closer resembles themselves.

Okay, enough with the amateur psychologist mumbo-jumbo. On with the fun stuff!

Each “Toy Box Review,” I’m going to review of a toy product and it’s contents. This week: a toy collection I randomly found on Amazon. It is the:

Watch as the magical lid refuses to go back on…

Before I bought it, it looked: like your standard bucket of strange, monstrous creatures. The snapshot accurately captured the final product, although I’m a little sad that two of the designs feature in the photo didn’t end up in the kit. 4/5 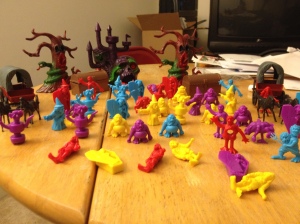 First impression: It’s definitely a large set. At $16.99, it wasn’t exactly a bargain, but I was definitely getting my money’s worth. The color scheme is quite fun, really; the red and purple are wonderfully dark and Halloweeny. The electric blue and yellow don’t match the mood quite as well, but they provide great contrast to the red & purple, so it all works out. 5/5

The Witch: One of the pieces I immediately fell in love with was the witch figure. For this reason, I included in several of the shots, to give a frame of reference for the scale. 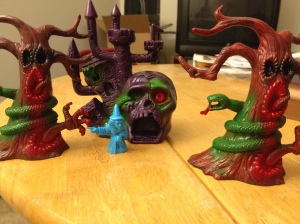 Two haunted trees, ready for a night on the town.

The Set Pieces:The playset came with 2 large haunted trees and a castle. The trees are wonderful, even if the paint job is a bit heavy handed. I love the color on the castle, but what takes away from it is the SCALE. It’s hard to tell, but on the bottom of the skull mouth are tiny steps- meaning, it’s supposed to match a figure that would only come up to the witch’s shin. There’s even a tiny door on the back that’s equally as small. This makes the castle less useful in a st, unless it’s a “far off castle on the hill.” 4/5

The Props: The set came with 2 wagons and 2 treasure chests. The wagons are quite obviously ripped off of a Western line, but the fact that the canvas was printed in grey plastic instead of white really adds to the Transylvania feel of it all. The two treasure chests are way too large for “treasure,” but they actually work as really large coffins. The color is great, but before I even used them, I could tell that the hinges on the lid were broken the second I took them out of the tub- they come completely off when you open it. Still, the plastic “lock” on the front actually keeps it in place when shut, so it’s not a complete wash. 4/5

The Good: This shut covers some of my favorite pieces of the set, going left to right: 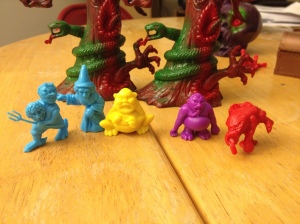 Pitchfork: Really like this guy. Can’t tell if he’s holding a monster head, or a mask- either way, there’s a story there! I only regret there’s only one in my tub.

Witch: As I said, fantastic. Lots of energy and character in her pose. I also got a ton of her, in all colors.

Fat Things 1 & 2: I also have a lot of these things (devils?) They’re just what I was hoping to get in the set; things that are not clearly defined, but fitting the mood. To me, they kind of look like Evil Buddhas. They also have an adundance of Plumber Crack from behind, which is an… interesting choice.

Nightmare Hound: Another “no clue what they were going for” toy, but they succeeded. The creature looks like a mutated humanoid or animal that’s balancing on one foot, mid-sprint.

The Ugly – These next few pieces aren’t terrible, but don’t quite blow me away (again, included the witch for scale.) 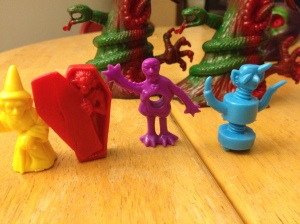 Some inspired by hot-wing-induced nightmares, I suspect.

Coffin-Dude: This guy almost made it to the awesome side, if not for the scale of him. Take away the coffin, and he’s tinier than everyone else. It could work, “Suddenly, the coffin opens, and the Undead Mickey Rooney creeps out of the wooden box…”

Hole-Chicken-Man: I asked for weird, and weird I was given. The purple guy in the middle is beyond description- the best I can guess is that it’s a bald rooster-man hybrid who seems happy you shot him with a cannon. Or, he’s a crossbreed between a chicken and a donut. It’s hard to tell on the photo, but he also has two random details nea his chest- they may be attempts to mold feathers, but it kind of looks like he duct-taped two small t-bone steaks to his torso. Maybe that’s why you shot him.

Robot-Guy: In a different set, this guy might have made the “Good” category, but in a box filled with devils and witches, the robot is just out of place. His design is also odd in that, instead of eyes, he has two random spikes. They are likely attempts at alien antennae, but it instead looks like a lab accident shoved a spike through the poor robot’s eye. Which, also tells a story. Also, he loses points over the fact that his base is a bit less sturdy than the others, so he occasionally tips over.

THE BAD: The satyr and the Hunchback figure are both fantastic, except for the fact that they CAN’T STAND ON THEIR OWN. I could go to the dollar store and find 50 different toys, some of them devoid of detail, shape, or personality, and they’d at least stand up 9 out of 10 times. These guys? Not so much. I only received one of the satyrs, but a lot of the creepy butlers. He’s definitely good enough to fix, though.

Overall: I’d give it 4/5. It’s mistmatched and has a wide range of quality, but the box said “Haunted House,” I think they delivered a product that evokes a creepy, weird setting.

Now, here’s how I’ll close any given “Toy Box Review”- by pulling a “Gygax.” I will take the strangest, least defined thing in the review and attempt to make it into an actual monster. For this one, I’ll use the Skeleton Crew Fate Rules.

In the wild, they are a countless number of nature spirits, taking the form of trees, rocks, and rivers. Some live their long lives in the form of animals, in the shape of the bear or the duck. However, while the spirits do not age, they can be hurt and killed. A spirit of an animal that is shot may die, but it may linger on in a half-life- all kindness and mercy drained away, leaving only a spirit of vengeance. A Hunted Spirit will seek out the hunters that killed it and it’s forest friends, but will often hurt innocent mortals in it’s rage. These vengeful beings can change shape to human or animal, but the original scars remains.

Aspects: Must Have Vengeance!, Always Part Animal, Nature is my Home.

n  Blood Rush—For Vampanzees, blood is both an addition and an energy source

Shapeshift— Hunted Spirits may change shape as a free action.

Now, I challenge you, dear readers: use the Chicken-Donut Man, the fat devils, or any other toy and make a monster of your own (no rules necessary, if you prefer text.)